All of the Untouchable's attacks are magic-based, and it has the ability to freeze you, so melee is a poor choice of combat styles for this boss. The Untouchable also has very high resistance to melee attacks, so even if health were not a factor, melee would not be a useful option. Of the other two styles, the Untouchable is weaker to magic than range, and the healing power of blood barrage will drastically cut down on the amount of food required, so magic is the best choice.

For most bosses, damage-per-second (DPS) is more important than defense because it helps you to maximize kills per hour. Here, though, defense is much more important. Therefore, your goal should be to maximize the number of kills you can get per trip, rather than maximizing the speed of those kills.

|*Note: The max mage setup is very expensive per cast, but overall will upwards to 70s with Augour prayer. It is still recommended to use range with armadyl crossbow on this boss over mage.

Here is the best gear to use in each gear slot:

You can simply get one yourself by following these steps. It is also recommended to bring plenty of prayer potions and food as the NPC's you will be fighting have very accurate attacks:

Step 1 to Obtain the Orange Key: Teleport to Yanille and run to the West Direction towards the gates. When you have Acquired the orange key teleport back to Yanille and climb down the stairs north of the bank. Step 2: Kill the Fire Giants until you receive a yellow "Key" which are east of where you entered the dungeon too. Step 3: Once you have a "Key" run east and go down the staircase (This will use your key) 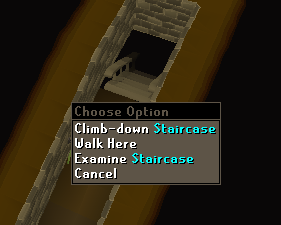 Getting to The Untouchable

Step 1: Climb Down the rumble and walk back towards the entrance.

Step 2: Run north and cross the monkey bars (this will consume a blue key) Step 3: Run north to the monkey bars which lead to the Untouchable Note: It is HIGHLY recommended that you keep at least one blue key in your bank. The Untouchable has a nasty habit of killing even the best-prepared players, so you will need a way to get back if you happen to die. If your mule account has good defense and armor, you can also use it as an emergency looter if you can't get back in time.

There is no reason to stay in the Untouchable's room between kills. Instead, you can cross back over the ledge and restore your hitpoints and prayer to full before the next kill. There is a chaos altar for restoring prayer. Doing this between kills will dramatically reduce the supplies you use, and it's the only way to get 10+ kills per trip.

Like many other Grinderscape bosses, the Untouchable is on a 210-second respawn timer, which means that it will respawn exactly 3 seconds after the drop from the previous kill disappears.

Because you can completely restore your hitpoints between kills, you might as well let your hitpoints get as low as possible while killing the Untouchable. The maximum damage that the Untouchable can do in a single attack is 40, so as long as your hitpoints stay above that point, you will be safe. Similarly, if your prayer is drained to 0, it will not actually turn off until the next time it would consume a prayer point. Therefore, if you're quick, you can drink a dose of Super Restore Potion and restore your prayer without ever deactivating. This can save a bit of supplies by allowing you to avoid drinking potions unless you absolutely have to. Obviously, these are advanced and risky tactics, so you shouldn't attempt them if you are unsure of your reflexes or suffering from lag.

Get a skull sceptre from Zod's shop in donator zone for 30m. It will teleport you to the Untouchable directly.

Video on killing The Untouchable

-TO BE ADDED-
Retrieved from "https://wiki.grinderscape.org/index.php?title=Main_page/In-Game_Section/Bestiary/Monster_%26_Boss_Drops/Boss_List/The_untouchable&oldid=8565"