The Warriors' Guild is a large building located in Eastern Burthope and is created by Harallak Menarous. To be able to enter the guild, You need either a total level of 130 between Attack and Strength, 99 in either skill, or a combat bracelet. Boosts cannot be used to enter the guild. Inside the Guild, players may participate in various minigames to gain Warrior Guild Tokens, which are used to gain entry to the top floor of the Guild as well as the basement, and be able to kill the Cyclops that resides there for the defenders as well as the Fighter Torso. If you're wearing an Attack Cape, you no longer need to use Warrior Guild Tokens, and can walk in for free, as long as it's worn at all times.

The Guild can be accessed through a few different methods:

The Animation room, created by Shanomi, is located on the ground floor(UK), south-west of the Guild Entrance. This room is the most common room to gain tokens in. Players must bring a set of metal armor, consisting of a full helmet, platebody and platelegs to be able to play the minigame. To start, either click the Magical Animator or use one of the armor pieces on it. This will make the armor come to life as an Animated X Armor (X being the metal armor you used, F.x. Mithril), which will then attack you.

NOTE: If you die while fighting the armour set, the armour can be retrieved from Shanomi

A table of each armour set as follows:

It is heavily recommended to use armor sets of Black and above, as the Bronze, Iron and Steel sets have a chance of breaking the pieces used the animation process.

When determining what is most efficient token wise, one must take into account that, while the Rune and Black armor sets might give the same amount of tokens per HP, the Rune armor has considerably higher stats, and is therefore less tokens/hr than black armor would be.

The Dummy Room, created by Ajjat is located on the ground floor(UK), northwest of the entrance. This minigame has no skill requirements; however, it is a good idea to bring melee weapons of all types and styles - stab, slash, crush, accurate, aggressive, defensive and controlled. This room tests players' reflexes with attack styles by creating various dummies. To defeat these dummies, you must choose the correct attack style and then hit the corresponding dummy. You can see what styles corresponds to which dummy inside the dummy room on the poster on the wall. Each correctly hit Dummy gives 4500 (2250 if level 92+) Attack Experience and 2 Warrior Guild Tokens. 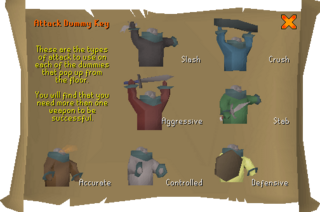 There are a total of seven dummies in the Dummy room, covering all 4 combat styles (defensive, aggressive, accurate, controlled) and all three melee attack styles (slash, crush and stab). Because of all the styles, choosing weapons with as many different styles as possible is optimal. One such choice could be the longsword, which can hit all dummies except for the Crush Dummy. A switch into a crush weapon (Like a warhammer) will make you able to do all attacks in just 2 weapon equips. Another combo could be the mace, which can hit all but the Slash Dummy, with a battleaxe for that one. If you lack any of the weapons, Anton on the 1st floor(UK) can sell you all the ones you would need. It should also be noted that the stats of the weapons do not matter, meaning that a Bronze Longsword is just as good as it's Dragon equilant.

The catapult room, created by Gamfred, is located on the 1st floor(UK), west of the Armoury. To begin the minigame, claim a two-handed shield from Gamfred (Right Click - Claim-Shield). The shield can only be equipped while standing in the target area (Marked with a bullseye). Once the shield is equipped, a menu, placed in the inventory screen, will appear with 4 types of ammunition, representing the 4 types of ammunition shot from the Catapult. The objective here is to, while having the shield equipped, select the ammunition that is being shot at you, to deflect it, giving you 5625 (2812 if level 92+) Defense Experience and 2 Warrior Guild Tokens. While this minigame is one of the easiest, the token pay-off is relatively low.

The shot put room, created by Sloane, is located on the 1st floor(UK), in the northeast corner of the guild. To begin, you pick up a cannonball from either pile and select one of the three throwing styles. If you fail to throw the ball, you'll drop it onto your toe, taking some damage as a result. To reduce the chance of this happening, you grind some ashes into ground ashes, using a pestle and mortar, then use the ground ashes on your hands. When succeeding on the put, you will gain 6750 (3375 if 92+) Strength Experience per yard thrown and some tokens. The number of tokens received is calculated as follows:

Each time you throw a cannonball, your energy will reduce. As your energy lowers, your shots will have a lower distance, until finally, below 10% energy, you can no longer throw. A quick way to regain energy is using energy potions or stamina potions. A way to keep the energy level high is also to throw one ball, sip a energy/stamina dose, then throw another ball. This way you keep a high amount of energy, resulting in higher token yields.

Jimmy's challenge is located on the 1st floor(UK), east of the Armoury. To begin the minigame, click either of the 4 vertical-standing kegs. You will start balancing the keg on your head. Every 5 seconds you will gain 40000-55000 (20000-27500 if 92+) Strength Experience, as well as 2 tokens for every keg on your head. Because the Experience stays the same, it is adviced to only balance one keg, and sip Energy/Stamina Potions to keep your Energy high. To receive your tokens, talk to Jimmy and ask to claim your tokens (Option 3). He will then sign you a note (Not an item), after which you can ask to claim your tokens from any of the 4 other masters, to get them. Because of the experience gained, and that it's semi-AFK, this is a very good way of training up accounts with specific builds without the need of a reset lamp (F.x. a strength pure with 10 hp).

On the top floor of the Warriors' Guild is a large room where you you will find sixteen Cyclopes which are either level 56 or 76. This is where you can earn the Bronze-Rune Defenders, which have some of the best offensive stats for a shield-slot item. To enter the room, you need at least 100 Warrior Guild Tokens. 10 tokens are spent entering the room, and another 10 every minute whilst being in the room. If you run out of tokens, Kamfreena will give you a warning, signaling you to leave. If you haven't left after 60 seconds, you will be forcibly removed from the room.

The first time you enter the room, the Cyclopes will drop Bronze Defenders. Every time you receive a defender, make sure to leave the room, then re-enter the room to be able to get the next tier defender. The cyclopes in this room drops the Bronze - Rune defenders.

The cyclopes can only be damaged with melee, as they are immune to Ranged and Magic attacks. They can, unlike the Animated Armours, however, be poisoned.

In the basement of the Warriors' Guild, accessible by the trap door west of the guild (exit through the food shop, near the bank), is another large room containing multiple level 106 Cyclopes. Lorelai will require you to have a Rune Defender or above in your inventory/bank or equipped to be able to enter the room. After showing her a defender the first time, you can enter the room without showing her one again. The Cyclopes that are located in the basement drop the Dragon Defender, as well as the Avernic Defender Hilt and the Fighter Torso. As with the top floor, you need 100 tokens to be able to enter the room, 10 are taken upon entry, and 10 every minute thereafter.