This is the Regular Slayer Guide, the guide for Ironman/ Hardcore Ironman players is found Here.

Slayer is one of the most challenging skills in Grinderscape, but, it is also one of the most rewarding. The slayer skill revolves around receiving a task to kill a certain number of monsters from a Slayer Master. Be patient while training slayer. The experience may seem a bit slow, but it will be worth it in the end. There are currently 4 different slayer masters with different difficulties and set of tasks. More slayer masters are expected to be added in the near future.

Each master will give a different set of tasks with different difficulties, Turael gives the easiest tasks and Duradel gives the hardest. Luckily, the harder the task is to complete, the more Slayer points you will be rewarded with. 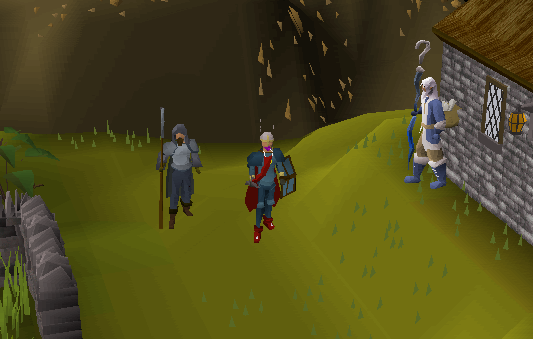 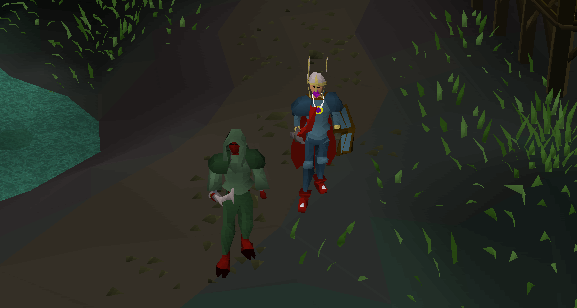 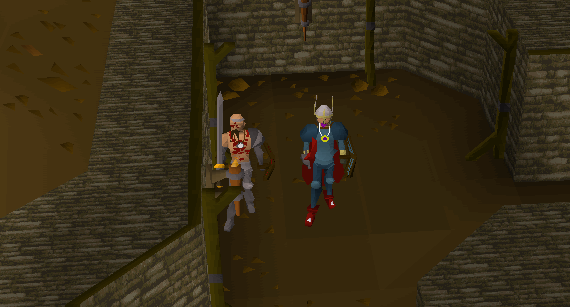 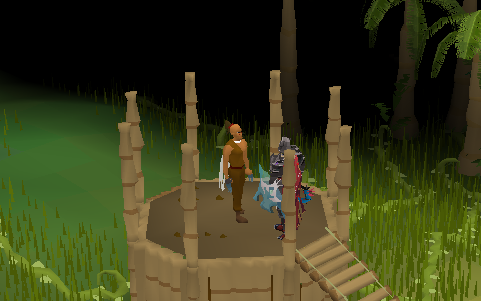 There are two ways to check what your current Slayer tasks is. These are by: 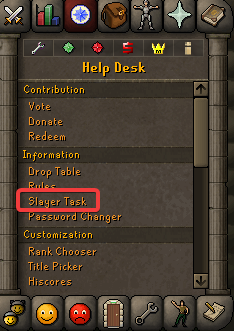 By purchasing the free Enchanted Gem from slayer shops, you are able to use it to teleport to the slayer task. Remember to right click and click "trade" to access the correct shop. 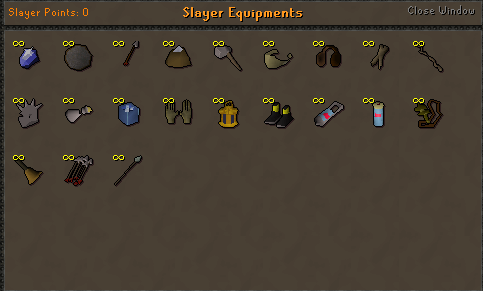 You will be offered a free tele to the task when clicking on the Enchanted Gem:

Below is a list of all tasks and some information about the monsters.

The list below does not include all the locations mentioned in the Slayer Assignments section.

The Ancient Dungeon is a dungeon is full of Slayer Monsters and is very useful to those who have a high Slayer level.

The Ape Atoll Island is a big island where a few Slayer Monsters are located.

Players can get to the Ape Atoll Island by using the Ape Atoll teleport on Normal Spells, the Ghorrock teleport on Ancient Spells and the Ice Plateau Teleport on Lunars spells. Every user, regardless of their level, has the ability to use these teleports.

The Asgarnian Ice Dungeon is a moderately large dungeon in Asgarnia. The dungeon is houses monsters that can only be killed by those adept in the Slayer skill.

The Brimhaven Dungeon is an area known for being the home of several Slayer Monsters. The dungeon is the third largest of Grinderscape, surpassed only by the God Wars Dungeon and the Chaos Tunnels.

Players can get there by using the Brimhaven Dungeon teleport in their spellbook under the Combat Training teleports.

The Chaos Tunnels are a large dungeon network located in low-level Wilderness, north of Edgeville. The Chaos Tunnels consist of 48 different tunnels, each containing at least one type of monster. You can go to the various chambers by using portals that are in each room.

Players can enter the tunnels by climbing down any one of the five different rifts in the Wilderness, North of Edgeville. Although players need to pass through the wilderness to reach the tunnels, they are not a PVP area.

The Dagannoth Dungeon is a small dungeon in which you can find lots of Dagannoths for the Slayer Task.

Players can get to the dungeon by using the Dagannoth Teleport under the Monster Teleports.

The Edgeville Dungeon is a large dungeon found beneath the city of Edgeville. A significant amount of Slayer Monsters can be found in this dungeon.

Players can get to the dungeon through the trapdoor located in the market place.

Karamja is a big island where you can find a few Slayer Monsters that are mostly for low level slaying.

Players can get to the Karamja Island by using the Karamja teleport in their spellbook under the Skilling Teleports.

The Karamja Dungeon is a small dungeon where a few Slayer Monsters are located.

Players can get to the dungeon by using the Karamja Dungeon teleport in their spellbook under the Combat Training teleports.

The King Black Dragon dungeon is a very small dungeon with one Slayer Monster.

The Slayer Cave is a dungeon located south-east of Rellekka, featuring monsters that can only be killed by those adept in the Slayer skill.

Players can get to the dungeon by using the Slayer Cave teleport in their spellbook under the Monster Teleports.

The Slayer Tower is located to the north-west of Canifis. There are three floors, each with at least two Slayer Monsters. All monsters within the building require a certain Slayer level to kill, the lowest being crawling hands at level 5, and the highest being Dark Beasts at level 90 Slayer.

The Smoke Dungeon is found beneath the Kharidian desert, near the desert town of Pollnivneach. The area was released on 16 December 2014.

The Tarn & Ice Queen area is a small area where you can find two different Slayer Monsters which are crowded on other areas.

The Taverly Dungeon is the fourth largest dungeon in Grinderscape, surpassed by Brimhaven Dungeon, the Chaos Tunnels and God Wars Dungeon. Every monster found in this dungeon, with the exception of Druids and Black Knights, can be an assignment of a Slayer Master.

Players can get there by using the Taverly Dungeon teleport in their spellbook under the Combat Training teleports.

The Tzhaar City is a medium dungeon in which you can find four different types of Tzhaars. When you have a Tzhaars task, all of these count for the same task - the ones in the waves to Jad don't.

Players can get to the area by using the Fight Cave or Fight Pits teleport in the Quest Tab.

The Wilderness is very big area located in the north part of the server. This is a PVP area, some places are 1v1 and some are multi area. In the Wilderness, items are lost in death.

Players can get to the Wilderness by running from cities like Falador, Edgeville, and Varrock under the City Teleports. Also, players can access Wilderness by:

With every task completed you will obtain Slayer Points as a reward. With that you can purchase slayer items/tools that can help you with your slaying adventure. You can view the options by trading any of the slayer masters. Upon completing every 10th and 50th task, you will be rewarded with bonus Slayer Points.

These points can be spent at the Slayer Reward Shop, to access this store, choose the "Reward" option on any Slayer Master.

There are three different tabs in the store. These are "Unlock", "Extend", "Buy" and "Tasks ".

The "Unlock" tab is pretty straight forward, from this tab you can trade points in for different slayer abilities and unlocks. For example, you can learn how to make slayer helmets for 400 Slayer Points. 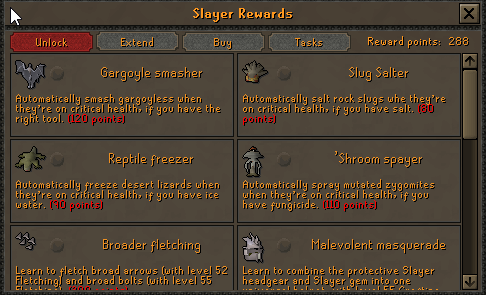 The "Extend" tab is where you are able to purchase certain extended task abilities, this will extend the number of slayer monster kills. For example, you can purchase the "Need more darkness" for 100 points. Resulting in you to get bigger dark beast tasks. 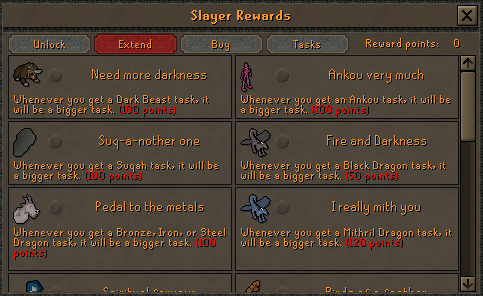 The "Buy" tab allows you to purhcase useful items such as the slayer ring or a black mask used to create a slayer helmet. 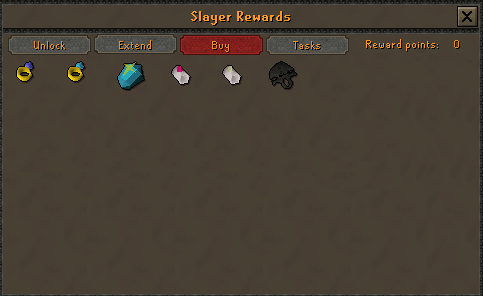 Lastly, the "Tasks" tab allows you to block a specific task or even cancel a task. Each slot costs 100 Slayer Points. 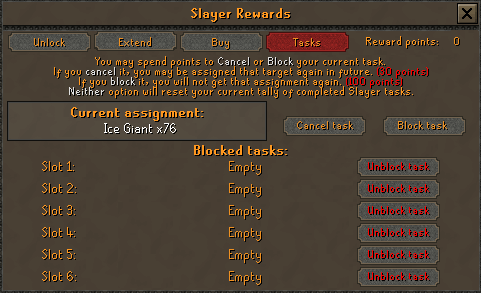 Once you have unlocked the ability to craft your own Slayer Rings, you can take a Gold Bar, an Enchanted Gem, and a Ring Mould to any furnace to create the ring.

The Slayer Ring is a very useful item when it comes to Slayer. The Ring of slaying has the following abilities:

In order to create a Slayer helmet, you must first unlock the Black Mask and ability to craft feature via Slayer Rewards. Once that it done, make sure all the materials are in your before proceeding. All you have to do, then, is use one piece on the other.

Materials to make a Slayer Helmet:

If you reach level 99 in Slayer, you can talk to the Wise Old Man at home to obtain the Skill cape. He is located at home, in the building north of the bank. The 99 cape costs 120K Gp and comes with a matching hood. Both the Slayer cape and hood give +9 bonus to all defense stats.

If you reach 200m experience in the Slayer skill you will also unlock the ability to buy the Master Slayer Cape. It is exactly the same as the normal Skill cape. However, you can adjust the trim colour to whatever you like. This cape costs 2.5m Gp. 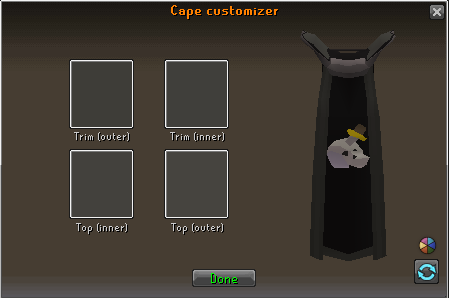 << Back to the main page