This boss is located in the wilderness. Please be cautious when entering with expensive items.
Difficulty: Medium

Galvek is the final boss of the Dragon Slayer II quest. He was a dragon incubated by the Dragonkin Zorgoth, who planned to use Galvek to destroy humanity after being imprisoned for ages because he was presumed to be a violent Dragonkin. Zorgoth gave it the name "Galvek" because it was the Dragonkin word for "Fate". Galvek is a special breed of dragon, as it is more serpent-like and has the ability to control other dragons. Galvek automatically attacks players in his area with Melee, Range and Magic. He can occasionally launch fire bombs, which if touched (bombs cover a 3x3 radius), will deal an incredible amount of damage, and will very likely instantly kill the player. Galvek's defense in this phase can be lowered, however on transition to phase II his defence will be restored to its base value.
Phase II: Galvek takes on the powers of air. He can occasionally launch gusts of wind that drains player's prayer slightly. Galvek also begins to use Ranged attacks here and uses his Ranged and Magic attacks at random. Galvek still uses the one-hit fireball in this stage.
Phase III: Galvek takes on the powers of water. He can occasionally send out tsunamis (acting much like the fire waves along with the standard one-hit fireball. If hit by these waves, the player will take over 100 damage. Phase III has the potential to be Galvek's deadliest phase, as the player is incredibly limited to movement if Galvek launches his tsunami and his fireball subsequently, leaving almost no room for error. Galvek also uses Ranged attacks much more commonly in this phase.
Phase IV: Galvek takes on the powers of earth. He can occasionally launch earth projectiles, which if the player is caught in, will be bound for several seconds. This deals no actual damage to the player, but leaves them extremely vulnerable to the highly damaging dragonfire, which he almost always uses if he is successful in binding the player. His earth attack can be avoided by simply moving one square. 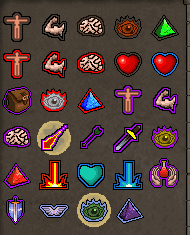 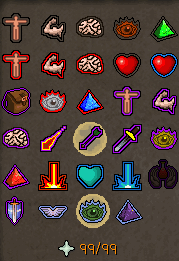